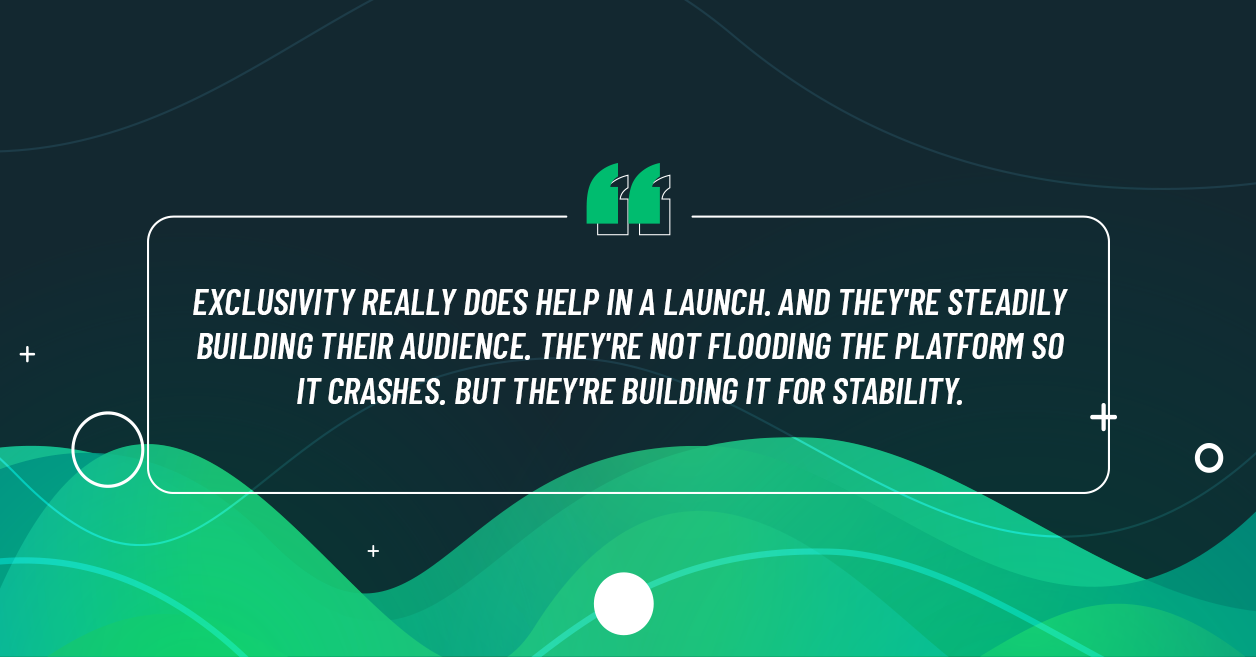 Let's talk about Clubhouse. Clubhouse came onto the scene here recently, and I got an invite early on. I started jumping in and playing around and there are some really cool things. It's basically an audio-based social network but it's only on iOS. That's the first flag to me because it's only available to Apple users. (Caving in To My Apple Addiction was probably a good thing) There's a very limited audience for it. But the thing that is really interesting is their launch strategy. They’ve created exclusivity. And so you can only get in if you get an invite. I get so many messages from people like, “Hey, you got an extra invite? Can I get in? I want to get into this.”

There's always something about exclusivity. And we saw this with Facebook when you had to have a college email account. And then when they opened it up, everybody flooded in. Exclusivity really does help in a launch. And they're steadily building their audience. They're not flooding the platform so it crashes. But they're building it for stability. The problem is, these platforms grow so quickly and then people will check out if the engagement isn't really there, so masses aren't there. It's often not worth their time and attention to invest in these platforms. So it's complicated.

You basically create an account and then there are rooms that people create and you can create your own room. And in that room, you can audibly talk, so it's basically live streams or live podcasts. It’s how people are often describing what's happening in Clubhouse. And then in your room, you can talk and everybody listens and then people can raise their hands and you can allow them to ask a question or you can invite other people on stage and you can have multiple people on stage, and you basically have a conversation. These conversations are lasting hours and hours and hours. They say a room doesn't actually catch momentum typically until three hours into that room. If you are considering jumping on to Clubhouse, you might want to consider learning the 7 Steps to Launching Your Podcast. Now, there have been some interesting rooms where Elon Musk has jumped in and had some conversations about Robin Hood. And, you know, there's been some surges in unique situations. But generally speaking, a room takes a long time to develop and kind of catch attraction. But you are seeing that some of the early adopters that are jumping into this platform are really starting to build a unique audience where they didn't have before. 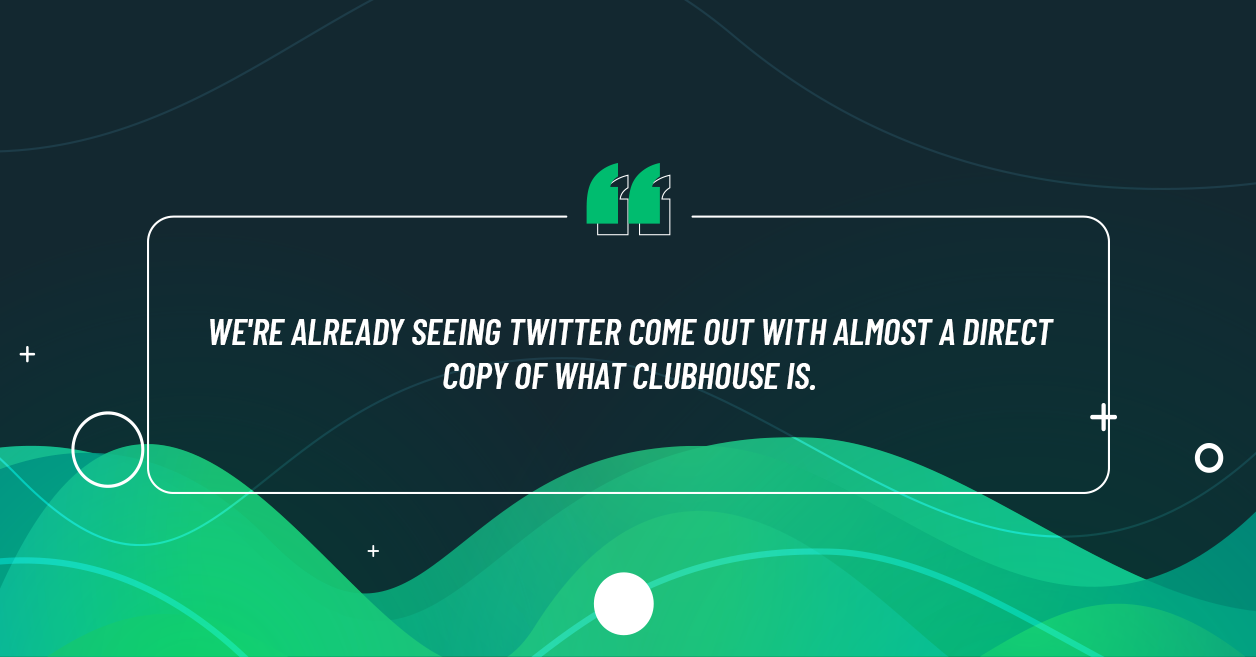 How Are Other Platforms Catching Up

And so if you think about a new platform like Periscope, when that came around, if you jumped in early, you could build a really large audience. It required a big-time investment, but you were able to build that audience because Periscope was getting so many new users and they were looking for people creating content. And they were able to send those people to you if you were one of the few people actually creating content, figuring that out quickly. And then Periscope kind of trickled off and Facebook Live came along and that speaks to where I believe Clubhouse is going. Before people start to consider the idea of whether It Is Time to Abandon Twitter, we're already seeing Twitter come out with almost a direct copy of what Clubhouse is. And the reality is Twitter has more developers. Twitter has a built-in platform. For over a decade, I've been on Twitter building a community there. And so rather than starting over, I'm going to most naturally just lean into Twitter if this is a format that I'm going to use. So that said, audio social networks or audio functionality within social media makes a ton of sense. And it's a great concept, but we saw things like Meerkat when Periscope and Meerkat were kinds of those first two live-streaming video platforms. And then, you know, Periscope got bought by Twitter and Meerkat essentially just went under because they didn't have enough traction. And people chose they weren't going to be everywhere.

And so if I were to guess where this is going, I believe Clubhouse is either going to get acquired or they're going to get copied and then that will limit the engagement there.

So it might develop, but it's still a niche community there. But I really don't see this as a platform that's going to be around for a long time. I'd love to be wrong, you know, I'd love to see a new platform come along and Facebook not just swallow them up or copy them. But I really struggle to see that happening. 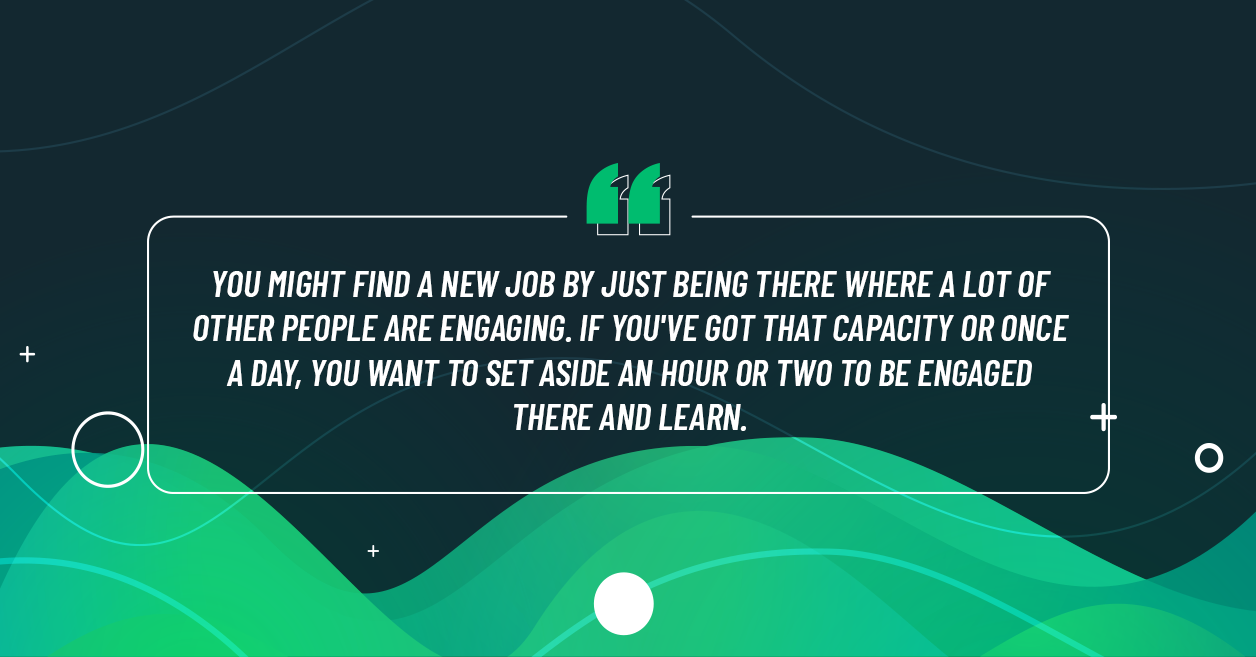 Whether you should invest or not at this point, depends on how much time you have. If you're in between jobs and you have a lot of time, jump on Clubhouse and build a community there. Similar to LinkedIn Live, You might find a new job by just being there where a lot of other people are engaging. If you've got that capacity or once a day, you want to set aside an hour or two to be engaged there and learn. There's an opportunity to basically do a weekly webinar, a daily webinar, poke around, tinker a little bit. But the reality is because it's not on Android, that limits a lot of people. You just jumping on doesn't mean you're going to build a significant audience very quickly. You're probably not going to build a significant audience very quickly by just jumping on once a week or even once a day for a limited amount of time. So because of the amount of time it takes and because of its lack of mass audience, whether people are still on the platform or yet to be on the platform, it's probably a wait-and-see. 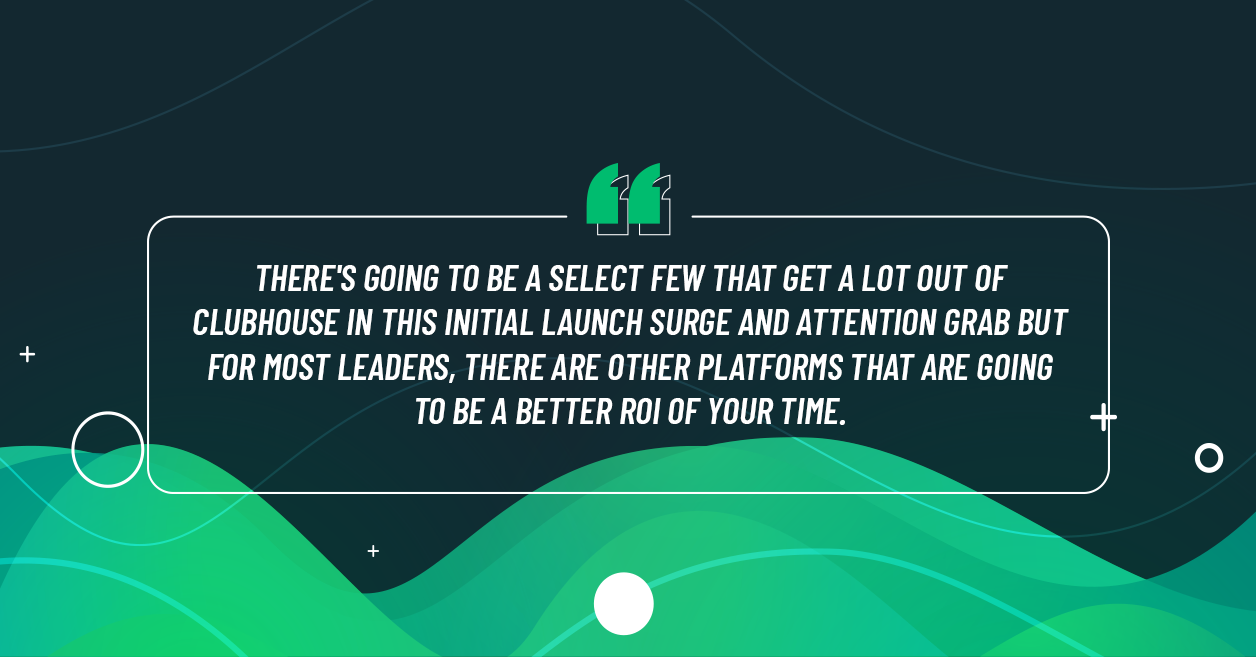 It's worth it if you get an invite to learn the functionality, just like we would learn Snapchat and then that Snapchat function came to Instagram and the value of many of our investment in Snapchat came from the learnings we had from using Snapchat to then be able to use Instagram story so quickly and easily. There's going to be value in the learnings, but I don't necessarily believe there's going to be value in building an audience and what it takes to build an audience on Clubhouse. There's going to be a select few that get a lot out of Clubhouse in this initial launch surge and attention grab but for most leaders, there are other platforms that are going to be a better ROI of your time.

Let's see where it goes. I'd love to know your opinion. Leave me your thoughts in the comments. Let me know. Do you agree or do you disagree? Are you loving Clubhouse or are you confused by Clubhouse? What do you think? I want to know.