Cryptocurrency is a virtual or digital form of money that is created and transacted on a blockchain. A lot of different cryptocurrencies and tokens have already made a name in the market; with Bitcoin, Ethereum, Dogecoin, and Cardano as some that have gained massive popularity with crypto investors. We might never know what the next great crypto is going to be as these digital assets continue to be created every second.

Crypto investors are treating cryptocurrencies not only in earning short-term profits, but also for long-term investments. With so much going on in the cryptocurrency space, it's confusing to know which ones are worth investing in.

In this latest video, I am going to talk about my top five cryptocurrencies that I have invested in, and why I believe in their future. Although I’m definitely nervous that this video might not age well…

Also, I hope it goes without saying, but I’ll say it anyway: this is not financial advice. This is just my opinion based on my experience.

Feel free to drop your comments and questions. I would love to help answer your questions to better explain and guide you about these cryptocurrency projects.

In this video I'm going to talk about my Top Five Cryptocurrency Projects. Now to be clear, this is not financial advice. I know that's what everyone says when you watch crypto videos but definitely don't take advice from me my wallet has done what most I've done and gone into steep decline as of late. But I have been in the crypto space for about five years. I continue to learn a lot and I'm going to talk about why these projects are my top five projects and why I believe in them long-term and not just as a short-term graph.

Now I have been into cryptocurrency for the past five years or so. Learned a lot, lost a lot, and won on a few things, and probably didn't cash out as fast as I should have on a few things. I want to share a few projects that I've gotten to know through the years and why I'm investing in these projects for the long term. At least four of them I would say that I'm invested in into for the long term and I'll explain more. 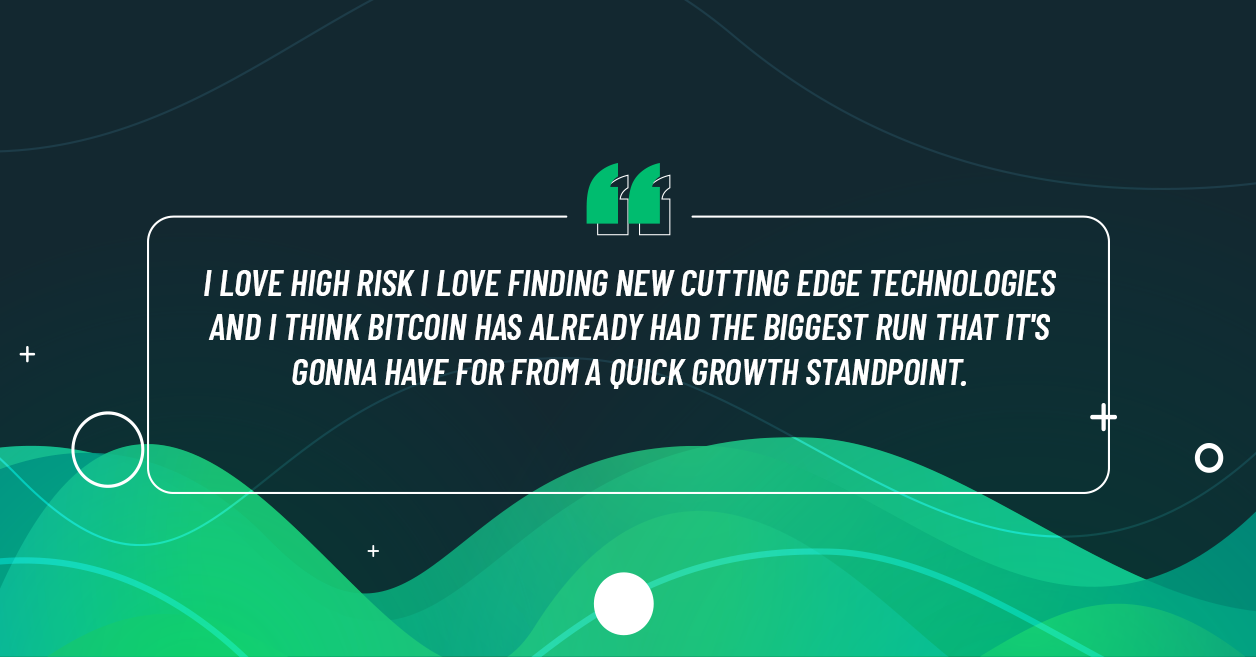 Let's get started, number five. The one we all know and love, Bitcoin. I am invested in Bitcoin I would say though I don't have a huge investment in Bitcoin honestly I get bored in Bitcoin a little bit because it has already had such a run and I do believe it's going to be a long-term winner.

But I think it's always going to be that kind of steady decline and so while it feels a little all over the place for traditional investors in the crypto world. I love high risk I love finding new cutting-edge technologies and I think Bitcoin has already had the biggest run that it's going to have from a quick growth standpoint.

But long term I'm betting on Bitcoin. I plan on holding some Bitcoin always and continuing to build my Bitcoin collection, I guess you could call it. 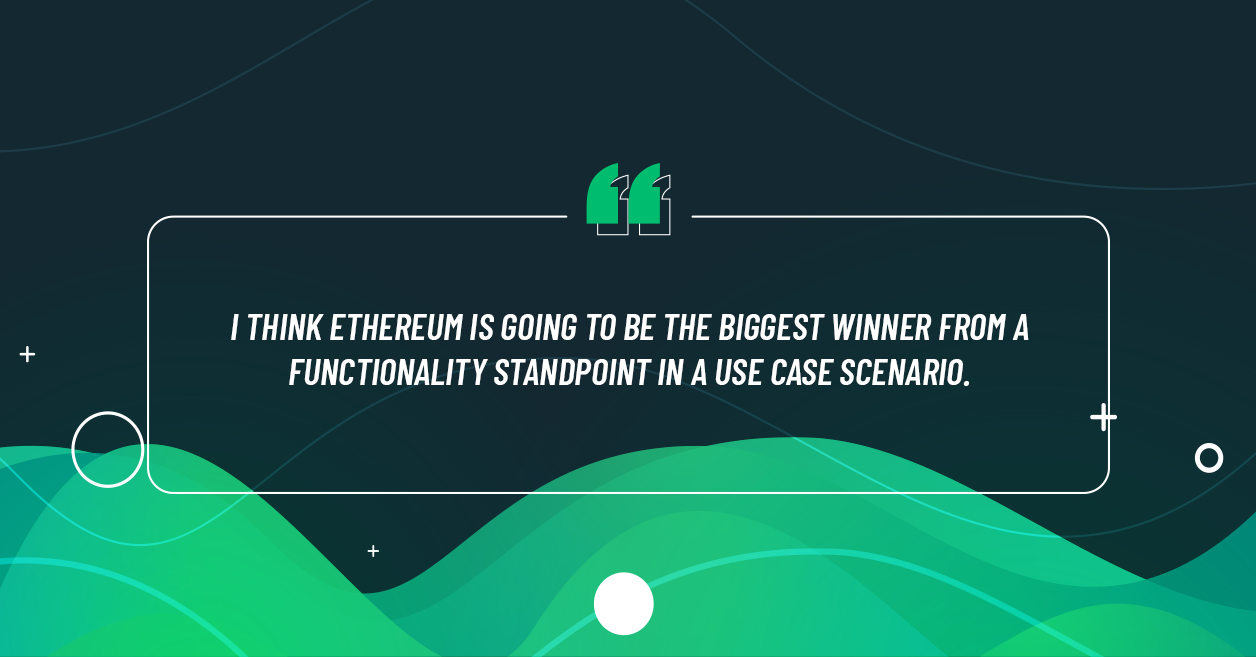 Number four is Ethereum. Like Bitcoin, it's the second most popular cryptocurrency and Ethereum is probably what I have used the most because Ethereum has the most utility from our perspective.

I'm just a believer that Ethereum and even though it has flaws and gas fees and just its speed I think those things are going to be and are being worked out. And so I'm a Believer in Ethereum long term. I think while there are some other unique things with Polygon and Solana that are interesting and doing some neat things, I think Ethereum is going to be the biggest winner from a functionality standpoint in a use-case scenario. 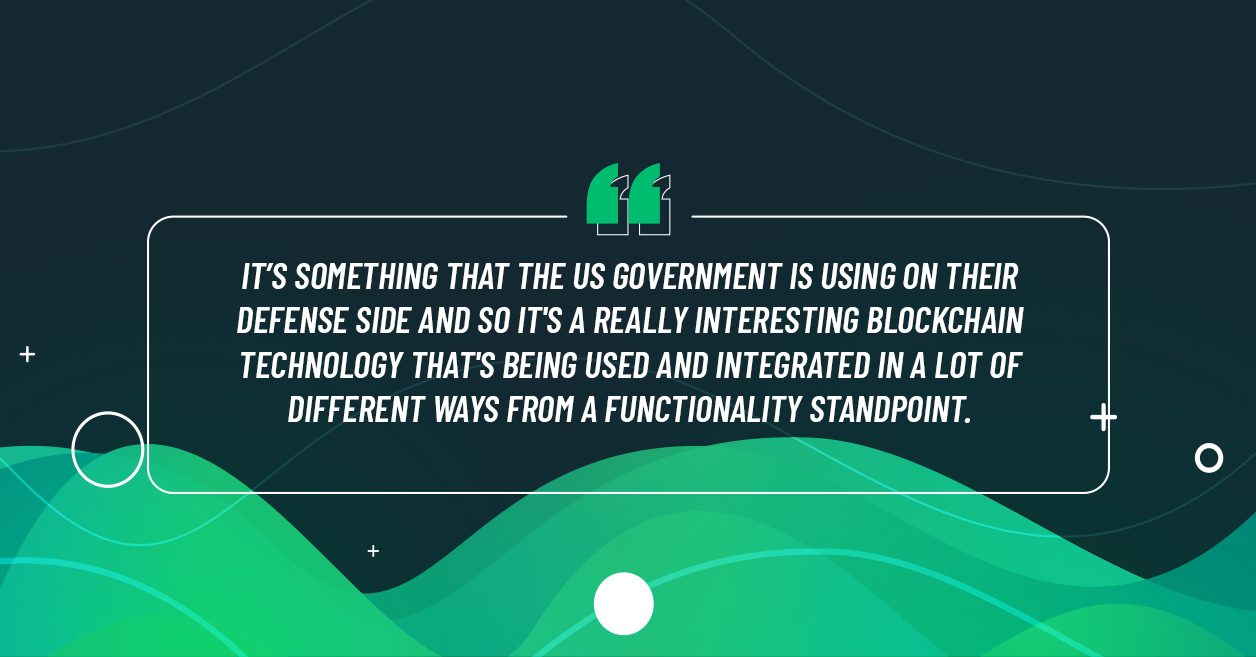 It’s something that the US government is using on their defense side and so it's a really interesting blockchain technology that's being used and integrated in a lot of different ways from a functionality standpoint. I feel like it's a technology that I'm just beginning to understand but it has really interesting efficiency and utility and cost-effectiveness to us that I just I see this being an up-and-coming project that's going to have long-term reward.

It already has incredible utility connected to it. I think the adoption, as more people become aware, is going to reach kind of a mass audience. So it's one that I'm betting on that hasn't yet, from my perspective, boomed that I believe in the next couple of years will. But we'll also have a really long-term growth trajectory to it, especially with the team and the structure behind the platform. So D-A-G is my number three most significant crypto investment. 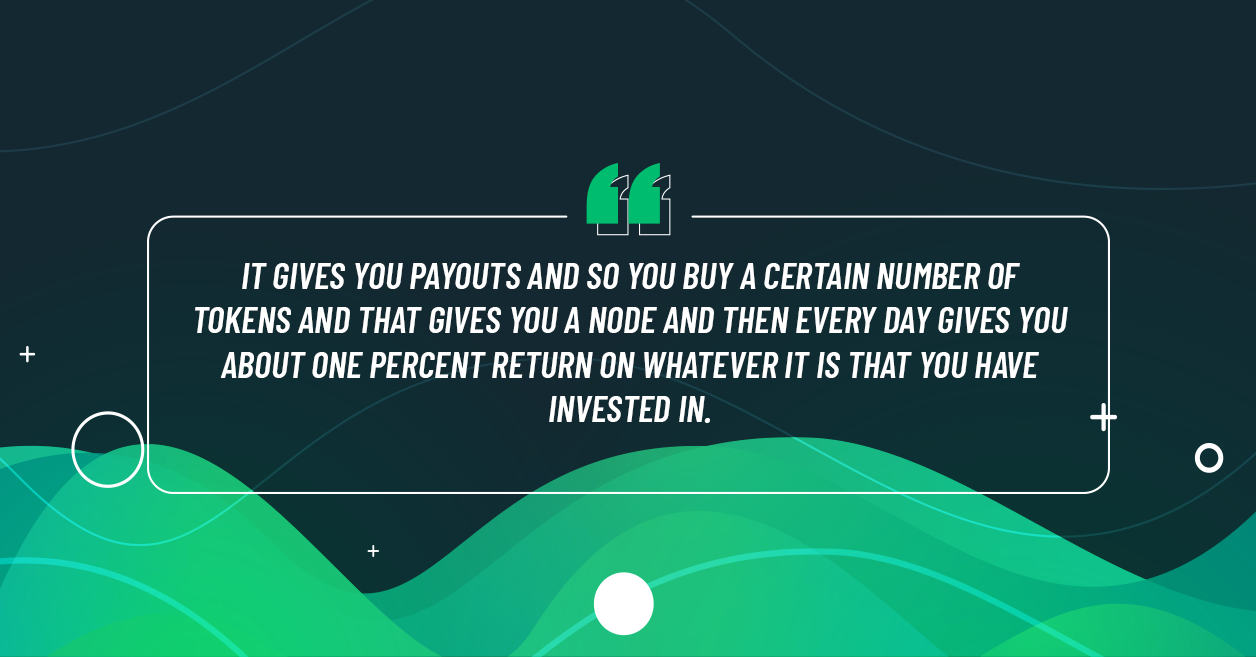 My top 2 might be surprising to many and that's Vapor Nodes. Vapor is something that Cryptonaires also got me into. Nodes are often referred to by many people as a kind of Ponzi scheme and a lot of node projects within a cryptocurrency. But nodes are something that I'm really interested in. Nodes are traditionally like a cryptocurrency miner that's helping to power the blockchain, helping to provide, kind of computing power to the blockchain.

But these nodes are not really that. These are they call it nodes as a service but it's not really providing nodes. They're more just kind of creating a collection of money that they're investing into other money and then giving you returns on that money, building kind of essentially a pool of money that they can then go and use to make more money. That's essentially what kind of these node projects are that people are investing into. It gives you payouts and so you buy a certain number of tokens and that gives you a node and then every day gives you about one percent return on whatever it is that you have invested in.

Theoretically, in about 100 days you get your money back if the coin stays in the same value. I've had the coins go up a lot in value and then I've seen them go down in the last three months like everything else has gone tremendously down in value.

In order to keep these going you have to keep getting new people involved which is why it's considered a Ponzi scheme. But if the money is well invested and then technology is creating other things then essentially the whole network becomes worth more. So theoretically that's where it becomes a better return on investment.

But when you look at something like Bitcoin that just sits there and you're depending on the value of the coin to increase rather than the coin going to work and producing essentially like interest is where this comes into place. It's often considered like DeFi. If you've heard of Decentralized Finance this is kind of that version of DeFi done for you where they're going and kind of doing that investing and giving you rewards on your tokens being staked.

Vapor Nodes is a plot, basically a token and a node system that I think has a good structure to it and something that I'm hoping will be around for a long time. It will not fizzle out like a lot of the other similar projects I've done.

The other thing I'll add on Vapor Nodes is that's the one that I probably think if there's one that is going to crash in the next year it would be Vapor Nodes. But they're building Vapor Chain right now in Vapor Decks and so I'm really interested to see with their technology innovations with their token with their community, with basically what they have what that's going to create from a monetization standpoint for their token holders and for their node holders. 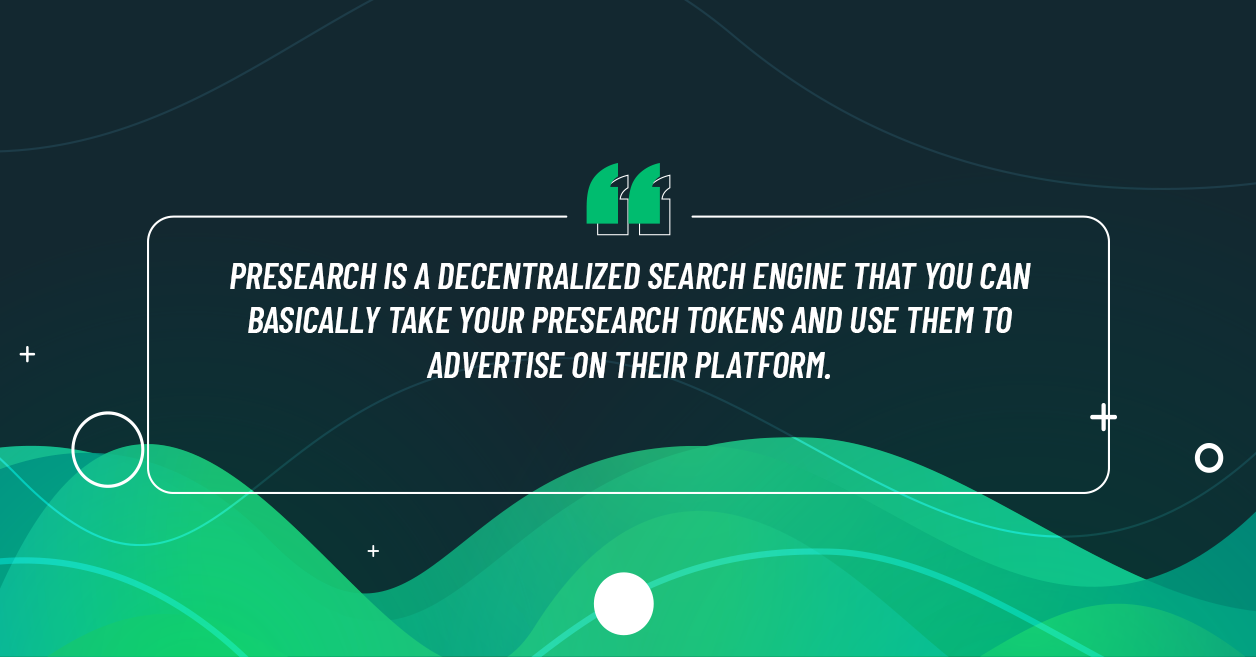 And on to my number one cryptocurrency and this is by far my favorite. I have dug in deep and that is Presearch so it's P-R-E is the token. Presearch is a decentralized search engine that you can basically take your Presearch tokens and use them to advertise on their platform.

You can use them to stake them and run a node to help power their token and then they'll give you rewards and Presearch and you actually get paid to search on Presearch. Every search that you do you can get about a tenth of a of a PRE token which is basically like a penny every time you search. But imagine getting paid every time you Googled. You know how much money would you have today of Google page? You are getting paid when you search because they're collecting data on you but Presearch is now basically sharing that back with you.

I love their structure. I love their tokenomics and it is a project that I very much believe in. The way they kind of built a whole economy integrated into their project is something that I just really like. The way it's structured and so I am deeply invested into Presearch. I believe that it is going to be probably the most withstanding and will create the most return on my investment into the future.

So all that said, this is not financial advice this is my opinion and where I am putting my cryptocurrency investments based on the technology that's being built, the functionality of the use case and where I see opportunity. I would love to keep sharing my thoughts with you as I continue to learn more about blockchain technology, bitcoin, and the crypto community.

I would love to know in the comments and I'm sure there's going to be a lot of spam comments. Don't go chase other kind of schemes that are posted in the comments but I would love to know are there some projects that you really believe in. So leave a legitimate comment. Don't leave a WhatsApp, don't click on a WhatsApp or go to a WhatsApp from somebody else, but if you have some projects you're interested in, explain what the token is and share why you believe in that token or that cryptocurrency and what it is about it because I'd love to learn about new cryptocurrencies new opportunities that are out there.

Demystifying Crypto Series: What is Bitcoin and Cryptocurrency Anyway?